A few close friends of TVR (Mr Jupp aka Belbury Poly/Ghost Box and Mr Stevens aka French Canadian Bean Soup) joined Mr Powell and Mr Mandrake in the town of Minehead for a weekend of alternative music appreciation. Here are some of my personal high points. 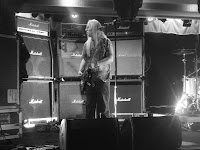 Pictured here J Masscis surrounded by his wrecking ball wall of noodlin noise. This shot was taken during his three song sound check. We watched the show from the relative safety of the rear of the auditorium wearing the ear plugs supplied. 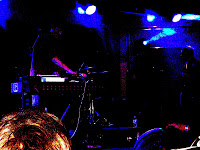 Spectrum gradually built a sonic drone assault from the ground up as we all gazed at our shoes. Meanwhile later that evening Mr Stevens and Mr Jupp where told to keep their opinions on how to re-boot a Power Book G4 to themselves. They duly left the auditorium with their pride still intact. 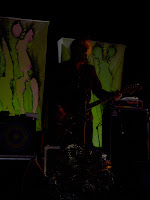 Lee Renaldo lining up here for one of his songs from the Eternal set plus Death Valley 69. 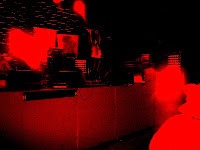 Thurston Moore about to dispatch yet another vintage Fender Jaguar. Sadly no Jaguars where harmed during the show.

Now play nicely together Sonic Youth and please try and use your inside voices. Think of the neighbours.
Posted by Twister Valley Records at 2:26 PM 2 comments: Links to this post